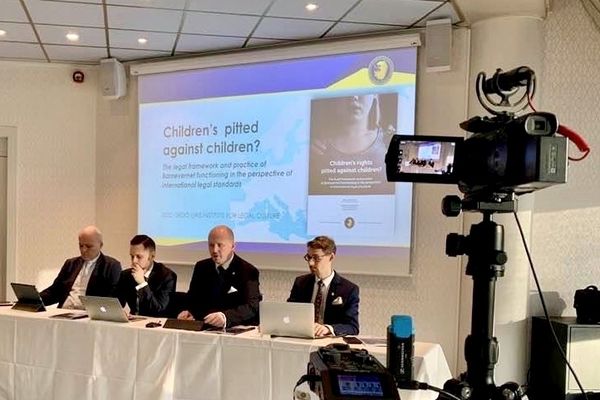 (Ordo Iuris, Warsaw) Norway posts many cases of human rights violations, including the right to the protection of family life, by Barnevernet, a controversial agency for children. Amidst international criticism and a series of judgments by the Strasbourg Court, the Ordo Iuris Institute has developed the first international report on Barnevernet's pathologies, which have encroached on the rights of tens of thousands of families and children. The publication was first presented in Oslo, with the participation of Norwegian human rights defenders and Norwegian government representatives.

The presentation of the study "Children's rights pitted against children?” coincided with an expert panel and a discussion, attended by human rights activists, Polish and Norwegian lawyers, Norwegian and Polish media, and representatives of the Ministry of Foreign Affairs of Norway and Bufdir, the government agency responsible for Barnevernet. Norwegian human rights activists referred to the presented report with approval. They underlined the comprehensive nature of the study and its importance in the fight for respect for children's rights and family autonomy in Norway. The representatives of Norwegian authorities participating in the meeting were mainly interested in the course of the work on the report, mainly in the context of the criticism of Bufdir following many months of ignoring Ordo Iuris' requests for access to statistical data and for explanations on important issues, which had been completely ignored in the publicly available guides and statistics. All participants were invited to comment in writing so that their views could be considered in the printed version of the report.

The study is the result of an 18 month long effort. Norwegian law, Barnevernet's operations and court jurisprudence were assessed against international human rights standards. The authors of the report drew on their experience gained during the successful asylum case of Silje Garmo of Norway, coupled with the scandalous conduct of Bernevernet vis-à-vis Sławomir Kowalski, PhD, Polish consul. The report was the first such comprehensive English-language study on Barnevernet’s activities, developed by an expert organization. A Polish version of the report will be published soon.

"The Ordo Iuris report, inscribed in the international criticism of the Norwegian system, is a strong voice for the protection of family rights and the rights of the child to be brought up in a biological family. The practices of Barnevernet constitutes a blatant violation of the rights of children to be brought up in a national, linguistic and religious identity. Our report describes cases where children and parents were banned from using Polish during visits, the rights of Polish children to participate in religious practices limited, and even situations of total long-term and groundless separation of children from their parents," describes Jerzy Kwaśniewski, advocate, Ordo Iuris President, co-author of the report.

Barnevernet is known to the public as an organization that has been engaged in numerous controversial interventions in family life, often involving the taking of children away from their families without a good reason. Violations of human rights in this area have been recently confirmed by judgments of the European Court of Human Rights in Strasbourg in the cases of Blondie Jansen and Trude Strand Lobben. More than 20 more cases against Norway and Barnevernet were accepted for trial by the Human Rights Tribunal in 2019. The proceedings concern stripping parents of the custody of a child, restriction of parents' contact with children in foster care and forced adoptions without the consent of the biological parents. The court has already consented to the Ordo Iuris Institute participation in 16 of those cases where "amici curiae" ("friend of the court") opinions have been submitted. Looking ahead, the entire report on Barnevernet is going to be forwarded.

The presentation of the report also provided an opportunity for Øystein Gudim, former leader of Socialist Youth, and the incumbent Director General of the Adoption Forum, to attack Ordo Iuris and Norwegian human rights defenders. Øystein Gudim claimed that Ordo Iuris financed Norwegian lawyers to win further proceedings against Norway before the European Court of Human Rights.

"The report that we presented is the result of months of team research work. We made a study visit to Oslo, where we met families affected by Barnevernet, human rights activists, local and European politicians. The preliminary version of the report was also presented during the summer session of the Parliamentary Assembly of the Council of Europe in 2019. Regretfully, representatives of the Norwegian government, the Agency for Children and the Ombudsman for Children failed to take an interest in presenting their stances and commenting on the objections raised against them. It is, however, good that they have accepted our invitation to the presentation in Oslo. The situation in Norway is very serious. The Council of Europe has already expressed its concerns, and the European Court of Human Rights has confirmed violations of children's and parents' rights,” comments Bartosz Zalewski from the Ordo Iuris Centre for Legislative Analysis, co-author of the report.