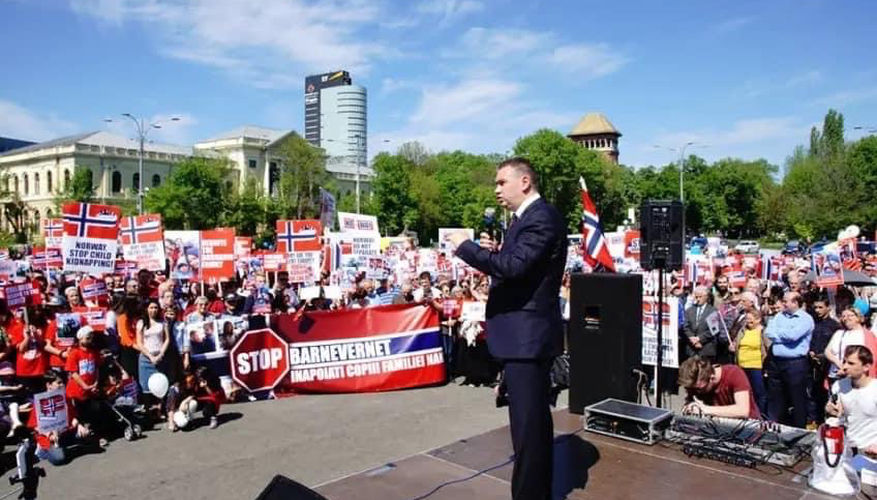 This photo belongs to Dr. Ben-Oni Ardelean, and shows him speaking in a rally against Norway´s Barnevernet

Dr. Ben-Oni Ardelean, Member of the Romanian Parliament and of NATO´s Parliamentary Assembly, has released a statement on social media about the developments of the Norwegian Child Welfare System (Barnevernet). KKN has had a strong relationship with the renowned Romanian politician for six years. We have made a Google translation of his statement from Romanian to English:

«Barnevernet, the child "protection" service in Norway and the author of unfathomable dramas for many resident families, including the Bodnariu family, brings Norway two new ECHR sentences. In total 13 sentences have come in the past two years. This is something serious! Extremely serious!»

«In addition to these convictions, during this period an extensive investigation is underway against one of the important leaders of Barnevernet, who is suspected of committing criminal acts. I recall the fact that during the Bodnariu case, another great leader of Barnevernet was discovered that he practiced pedophilia and owned a database of over 200,000 pornographic photos with minors.»

«The Bodnariu family case had a happy ending. I am sure that the Furdui family, along with all the families in the same situation, will be reunited and will continue their lives in peace and faith in God.»

«It is unbelievable that, in these times, thousands of European families live in fear and insecurity. Good always wins! Trust!»