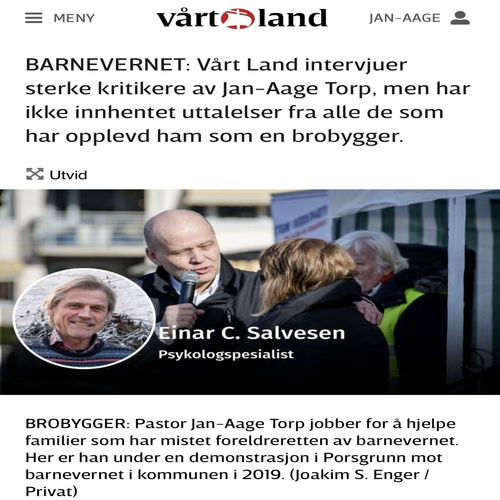 CHILD PROTECTION: Vårt Land interviews strong critics of Jan-Aage Torp, but has not obtained statements from all those who have experienced him as a bridge-builder.

I read with interest and amazement Vårt Land's attack on Jan-Aage Torp in a large article last Saturday. Here he is portrayed as a «door opener for ultra-reactionaries» and as «God's child protection lobbyist». (Editor´s note: Norway´s governmental «Child Protection System» is named «Barnevernet»)

The newspaper interviews strong critics such as religion historian Ingrid Vik and political scientist Jørn Holm-Hansen, but has not obtained Norwegian dissent or statements from all those who have experienced Torp as a bridge-builder, not only internationally, but also in Norway.

Torp is not narrow

This is evident, among other things, in his TV programs with guests of different views, expertise and life experience. The impression that he is a «door opener» must - in the name of integrity - also portray that he is just as happy to open doors for secular and liberal Norwegians.

Torp is not narrow at all, as Vårt Land tries to portray him. For several years he has collaborated with Norwegian professionals in psychology, law and social workers, in the fight against what we experience as Barnevernet´s abuse against families who are deprived of their children on a wrong or too flimsy basis. It is through this common area of ​​interest that I have become acquainted with Torp.

I do not have thorough knowledge of his religious work at home and abroad, and many of his heart issues fall outside my field of expertise and interest, but in our collaboration around Norwegian child welfare, he appears to be factual, committed and unprejudiced.

He helps families - including many foreigners - who have been unjustifiably exposed to Barnevernet´s oversized and incompetent intervention in vulnerable families, totally without any personal gain..

My impression is that he - as the undersigned is also fully aware - agrees that in some cases children must be taken out of the home due to violence, abuse or serious neglect. The reality is, however, that in many cases Norwegian Barnevernet misjudges, misinterprets and - on a very flimsy basis - makes emergency takeover decisions of children, denying them contact with biological parents who may be in a temporary crisis, thus destroying the relationship between parents and children.

This also has the negative consequence that the reunion between children and biological parents - which in most cases lies in the intention of the Barnevernet Act - becomes difficult and painful for the children. This extremely important point has been addressed by the European Court of Human Rights in Strasbourg and has led to the (Norwegian) Supreme Court also laying down new guidelines that Norwegian courts must follow.

Norwegian Barnevernet, on the other hand, is stuck in a quagmire of principled and prejudiced thinking that is to the great detriment of many Norwegian families.

Has played a key Role

The undersigned, in collaboration with many other professionals, has advocated for a change in Barnevernet's and the court's practice over a long period of time. (Editor´s note: Salvesen initiated a Notice of Concern to Norway´s Minister of Children and Families in 2015 that is supported by 250 professional psychologists, lawyers and social workers)

This has again created fertile ground for the European Court of Human Rights (ECtHR) in Strasbourg to be able to open almost 40 new cases against Norwegian Barnevernet since July 2019.

I myself have also had good knowledge of the two cases that Vårt Land mentions in its article, the Naustdal case and a case where a young mother sought asylum in Poland. Both cases clearly show the Norwegian Barnevernet's total lack of ability to show empathy, flexibility and contribute to finding good solutions.

In my collaboration with Jan-Aage Torp in this field, his commitment has been characterized by good expertise and willingness to cooperate. As mentioned, I have little knowledge of his religious and political position, but in the field we have collaborated, I experience him as a person who meets his opponents and partners - from very different backgrounds - with tolerance and openness.

It would have been reasonable if Vårt Land had a more nuanced presentation in its analysis than what appears in the article last Saturday.