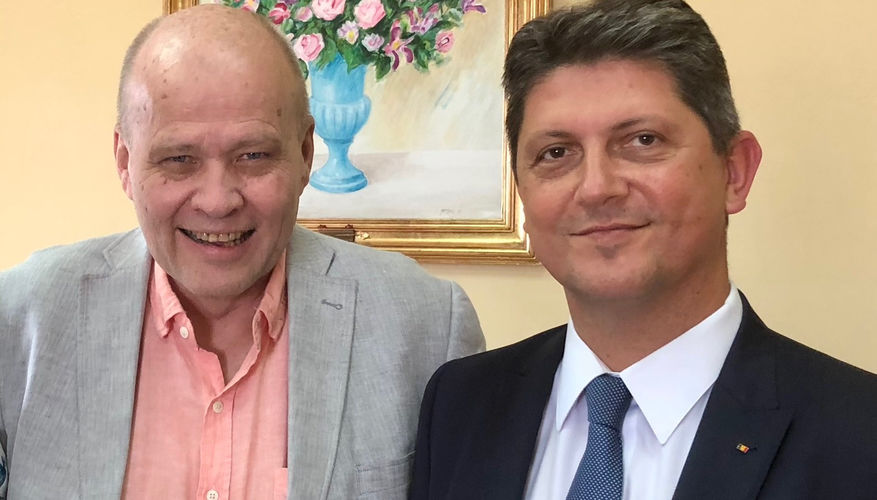 Jan-Aage Torp and Senator Titus Corlățean in the Romanian Senate

Yesterday, we conveyed the strong response from Dr. Ben-Oni Ardelean, MP of the Romanian Parliament and Member of NATO´s Parliamentary Assembly, to the 13 sentences thus far (since September 2019) against Norway´s Barnevernet in the European Court of Human Rights in Strasbourg.

Today, we convey the rallying call of the renowned Romanian Senator Dr. Titus Corlățean, formerly Romania´s Foreign Minister and Justice Minister, and currently the Chairman of the Committee for Foreign Affairs of the Romanian Senate and Member of the Parliamentary Assembly of the Council of Europe.

Like Dr. Ardelean, Dr. Corlățean has been a close friend of KKN since January 2016, and he played a pivotal role in the historic Bodnariu case in 2016.

In a statement on social media yesterday, Senator Corlățean joyfully tells about the numerous verdicts against the Norwegian Barnevernet. But he goes beyond that: Titus Corlățean calls Romanians worldwide to rally for the Romanian Furdui family in Germany, who have lost their seven children to the German counterpart of Barnevernet.

«Two new convictions against Norway at the European Court of Human Rights, for cases of forced and abusive confiscation from the parents of their children by Barnevernet, the hateful Norwegian authority for "protection" of children! 13 in total (! ) All 13 sentences have been pronounced in just two years by ECHR against Norway for violating Article 8 of the European Convention on Human Rights - protection of the right to private and family life! I remind you that Barnevernet was guilty of the Bodnariu family drama! They have absolutely deserved condemnations of Norway´s democracy and prosperity, which did not understand in time the need to stop these abuses nor to reform the system that abused thousands and thousands of families, many of them being foreign citizens, including Romanians!

Moreover, in these days, a criminal trial is taking place in Oslo against one of the important leaders of Barnevernet, for serious criminal acts. Just like several years ago, exactly in the period when Marius and Ruth Bodnariu went through the suffering of abusive separation from the five children, another great Barnevernet boss was discovered who practiced PEDOPHILIA and had in his computer a database of 204.000 Child Porn Photos! Let us remember to call things by name when we discover injustices or falsehood, and in European states with solid and prosperous democracy, some of which have been teaching us lessons in morality over the years... I will deal with the case of Dutch "morality" at some point, I assure you.»

«If the democratic and prosperous authorities of Germany avoid listening to our calls, of Romanians from many corners of the world, if they do not understand the abuse committed and do not reunite the Furdui family, they will have the same sentences against them at the European Court of Human Rights, and the protests of Romanian Christian communities and churches will grow in large numbers. See you (at the demonstrations) in Bucharest and Suceava on December 4th!»