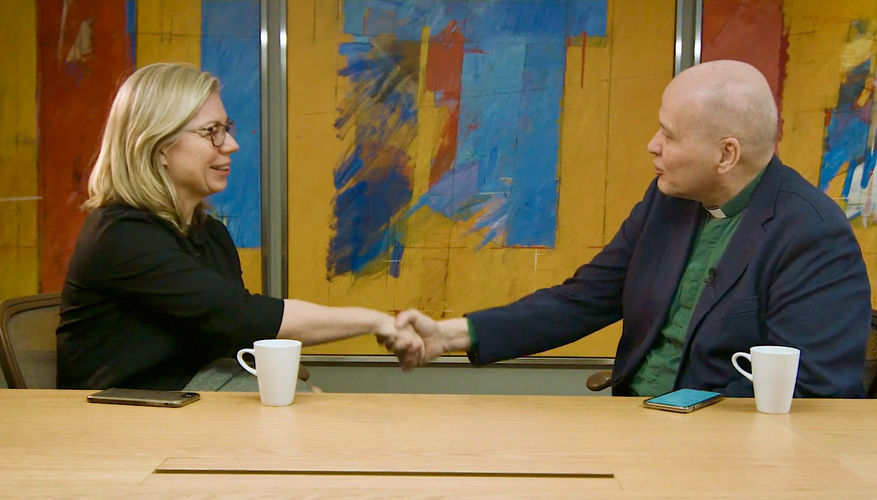 The program with Aftenposten´s Chief Editor was a huge success

Pastor Torp, who is KKN´s Chairman, had invited the Chief Editor of Norway´s largest newspaper, Mrs. Trine Eilertsen, to be his first guest.

The backdrop was that in 2011, Aftenposten launched a severe attack over 11 pages against Pastor Torp. Both the Norwegian Broadcasting Company (NRK) and the newspaper Vårt Land followed suit, and published huge stories that were totally based on Aftenposten´s coverage.

One year later, Aftenposten´s Ethics Editor contacted Torp and asked for an amicable solution to the complaint that the pastor had filed to the Norwegian Press Complaints Commission (PFU). The Commission was en route to sentence Aftenposten for breaches of the Ethical Code. Aftenposten suggested that they correct the mistakes and apologize to Pastor Torp, as well as offering him to publish on their editorial page a feature article on a topic of his own choice.

Pastor Torp was happy with the solution, as his intention was never to punish Aftenposten.

Within one hour after Aftenposten announced the amicable solution in the morning edition on February 2nd, 2012, NRK contacted Torp and asked for the same. NRK had Jan-Aage Torp as a guest on the national news program «Dagsnytt 18» that same evening, and they credibly expressed their apologies.

However, Vårt Land would not correct nor apologize.

Vårt Land was founded in 1945 as a newspaper for the Christian Church in Norway, but has increasingly for the past 10-15 years become a newspaper that propagates the pride ideology and  a negative message about conservative religion, including charismatic Christianity, which is the fastest growing religious expression in the world, even within the Roman Catholic Church. Jan-Aage Torp is largely considered as a leading proponent of charismatic Christianity in Europe.

When Vårt Land discovered that Jan-Aage Torp´s first guest in «Hovedstaden» would be Aftenposten´s Chief Editor, they recruited the Press Officer of the Humanist Association (Human-Etisk Forbund HEF) to launch a scorching attack against TV Visjon Norge and Pastor Torp on the cover of the newspaper.

The Press Officer is known to have left charismatic Christianity with strong accusations more than 30 years ago. The Humanist Association is a prime source for many of Vårt Land´s articles, and the leadership of the Humanist Association has for 50 years been known for their attacks against all religions in Norway, including the official Church of Norway.

Several months after the attack on Torp´s programs, it has become public knowledge that Vårt Land is trying to start a TV channel, although until now they are not getting support from Christian denominations nor other religions.

The inaugural program with Mrs Trine Eilertsen was a huge success, and the Chief Editor of Aftenposten was in no way halted by the negative warning.

In less than 14 months, Pastor Torp has produced 50 editions of his TV program on TV Visjon Norge with high ratings, and guests include Members of Parliament, Professors of Law, major artists and experts. And so far: Eight ambassadors.

The success of Pastor Torp´s programs seems only to have been aided by the attacks from Vårt Land and the Humanist Association.

We have learned from several ambassadors that Vårt Land is writing an article (negative?)  about the cooperation of Pastor Torp with Embassies. Not surprising, coming from Vårt Land....

Editor´s Note: In 2020, Pastor Torp invited the Chief Editor of Vårt Land to be the guest on his main TV program, «Hovedstaden», and in 2021 he has invited Vårt Land´s TV Editor to present their TV plans on his Norwegian «Innsikt» talkshow. Both of them have declined.