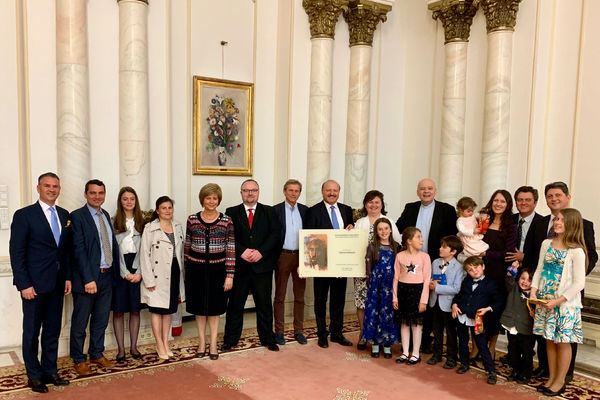 The Bodnariu´s, Ardelean, Corlatean, Ghiletchi, Salvesen & Co celebrating in the Romanian Parliament in May 2019

The 13-4 judgement this morning for Mrs. Trude Lobben against Norway in the European Court of Human Rights in Strasbourg would never have been possible without the beautiful Romanian-Norwegian Bodnariu family!

On November 16th, 2015, all hell broke loose when the infamous Barnevernet with uniformed Police stole their five children. After six months of agony, tears, and prayer, Fjordane Court in Norway set aside the verdict of Barnevernet and ordered them to send their kids home to mama & papa.

Tens of thousands had demonstrated and prayed worldwide under the leadership of Dr Cristian Ionescu in Chicago, along with the Romanian and Norwegian sides of the amazing family.

Romanian Senators Ben-Oni Ardelean and Titus Corlatean were the statesmen who brought the case before the highest political forums in Europe and the world.

The Vice-President of Moldova´s Parliament, Valeriu Ghiletchi, led a thorough investigation of the Bodnariu case, and similar cases, and after 2 1/2 years his report on behalf of the Parliamentary Assembly of the Council of Europe (PACE) was adopted as a PACE resolution. 72 percent of the Parliamentary Assembly supported the Resolution. The wording in Ghiletchi´s report is evident in the judgement today in Strasbourg.

Norwegian psychology specialist Einar C. Salvesen was «the strategic mind» behind the Bodnariu Family´s approach during the whole case.

Mrs Trude Lobben won the case today which had gone on since 2012. We rejoice with her.

However, she had lost all her previous legal attempts.

The real winners today are the Bodnariu´s & Co! Thank God for such people!

Ultimately, the winners will be thousands of families like Lobben in Norway and all over Europe!