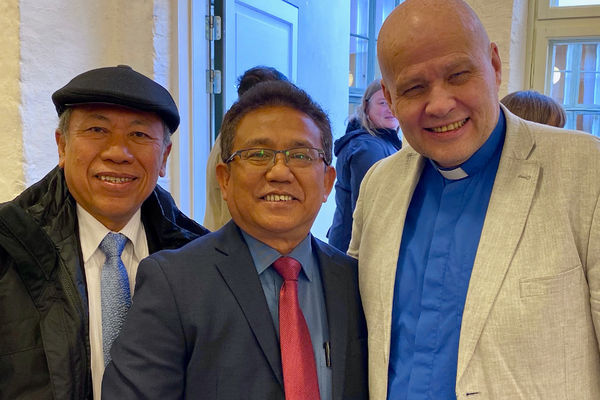 With the Special Envoy to Indonesia’s President for Interreligious Dialogue, Cooperation, and Civilization, Dr. Professor Syafiq A. Mughni and Pastor of Jakarta Lutheran Church, Rev. Gomar Gulton, who is the General Secretary of the Communion of Churches in Indonesia. Two wonderful Indonesians! 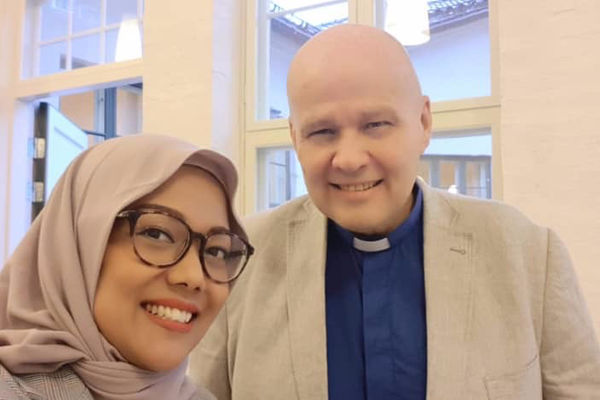 It is such a privilege to meet Ms. Jati Savitri, the Head of Digital Creative Content of Medcom - Citra Multimedia Indonesia. She is one of the up and coming female leaders in the great nation of Indonesia.

I was invited by the Indonesian Embassy in Norway to attend the first Indonesia – Norway Interfaith and Intermedia Dialogue which was held yesterday at the Faculty of Law of Oslo University.

At the end of the day, the Second Secretary of the Indonesian Ministry of Foreign Affairs, Dr. Arief Ilham Ramadhan, thanked me for my constructive contributions during the deliberations. He said that I had brought insights that the Indonesian side had been unaware of. He then invited me to be a participant at the second Indonesia – Norway Interfaith and Intermedia Dialogue which will be held in Jakarta, Indonesia in 2020. Immediately, I accepted the invitation!

Yesterday was a fascinating day.

I enjoyed so much the speeches by the Indonesian Ambassador H.E. Professor Dr. Todung Mulya Lubis; the Special Envoy to Indonesia’s President for Interreligious Dialogue, Cooperation, and Civilization, Dr. Professor Syafiq A. Mughni; Pastor of Jakarta Lutheran Church, Rev. Gomar Gulton, who is the General Secretary of the Communion of Churches in Indonesia; as well as balanced presentations from media experts from Indonesia.

I also enjoyed excellent contributions from Norwegian govermental representatives and the Center of Human Rights who gave factual information about Norway.

Yesterday also gave me as the Executive Chairman of Kristen Koalisjon Norge (KKN) the opportunity to present perspectives that can actually unite the great nation of Indonesia and my beloved nation of Norway.

The Norwegian side during the dialogue process was represented by the liberal Bishop Emeritus of Oslo, Dr. Gunnar Stålsett, plus Bente Sandvig of the anti-religious Humanist Association, as well as muslim leaders in Oslo, Senaid Kobilicia and Shoaib Sultan.

I was the only Conservative-Evangelical-Pentecostal-Christian from Norway, and I was not even included by the Norwegian delegation, but by the Indonesians!

However, although I was not an announced speaker, I was given ample opportunities for three interventions, one of which is on the audio link below:

I forgot to push the record button on my iphone for the two next interventions which were about:

and 2) my objection to speeches by four speakers from Norway who glowingly praised the Norwegian «Legacy Media» and spoke negatively about alternative media channels. I said that I no longer trust the Press Complaints Commission (PFU), and that I will hereafter consider bringing government-funded media violations before the Criminal Courts instead, based on paragraph 269 of the penal code regarding the penal responsibility of an editor-in-chief. In that way we will get a  fairer treatment by independent judges, and we may appeal to higher courts - which PFU does not allow.

I look forward to bring real unity between Indonesia and Norway - not a «unity» in which Indonesia is coerced by the oil money of the Norwegian establishment into anti-family and pro-LGBTIQ policies that are contrary to the deeply held traditional family values of the diverse Indonesian society.