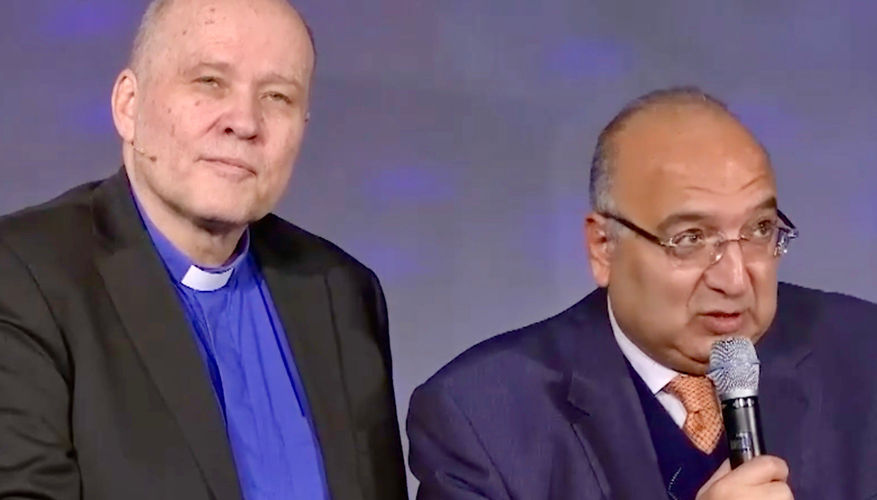 Ambassador Amr Ramadan with his host and translator, Jan-Aage Torp 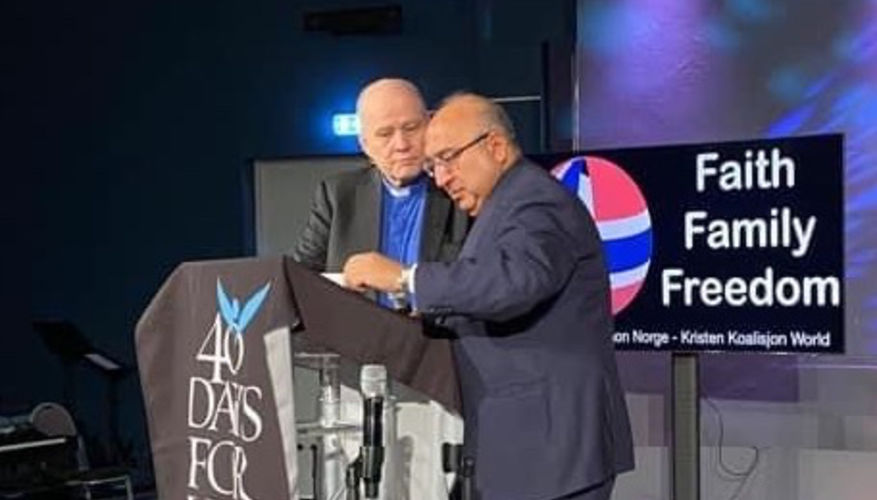 Ambassador Amr Ramadan with his host and translator, Jan-Aage Torp

It gives me great pleasure and honor to join the Ceremony today on a very noble and human cause, which is defending the family concept as “the natural and fundamental group unit of society and as such is entitled to protection by society and State" per Article 16 (3) of the Universal Declaration of Human Rights adopted in Paris (on 10 December) in 1948 constituting the main pillar of the international human rights law.

The preceding Article of UDHR, Article 16.1 indicates that “Men and women of full age, without any limitation due to race, nationality or religion, have the right to marry and to found a family.”

This aﬃrms the conclusion that the State is duty-bound to provide protection and support to the family, as a social institution, to enable it to undertake its expected role. This is not in contradiction with or at the expense of the primary responsibility of the State to protect all the individuals in all settngs and at all times including as being family members.

The Universal Declaration stated clearly in its Article 12 that “No one shall be subjected to arbitrary interference with his privacy, family, home or correspondence, or to adacks upon his honour and reputation. Everyone has the right to the protection of the law against such interference or adacks.”

The International Covenant on Civil and Political Rights adopted in 1966 and entered into force ten years later, reaﬃrmed in its Article 23.1 that “The family is the natural and fundamental group unit of society and is entitled to protection by society and the State”.

Article 18.4 of Covenant (ICCPR) goes on to obligate States parties to “undertake to have respect for the liberty of parents and, when applicable, legal guardians to ensure the religious and moral education of their children in conformity with their own convictions.”

Special measures of protection and assistance should be taken on behalf of all children and young persons without any discrimination for reasons of parentage or other conditions. Children and young persons should be protected from economic and social exploitation. Their employment in work harmful to their morals or health or dangerous to life or likely to hamper their normal development should be punishable by law. States should also set age limits below which the paid employment of child labour should be prohibited and punishable by law.

These fundamental principles were reaﬃrmed again and again at subsequent conventions, other relevant human rights instruments, conferences, Programs of Action and Resolutions, including the Declaration on the Right to Development, and as recent as the Human Rights Council resolution on Protection of the Family, including the resolution 35/13 adopted at its 35 session in June 2017 by a recorded vote (30 in favour, 12 against, with 5 abstentions). There were previous resolutions as well thanks to the work and commitment of a core group of countries who shared a common vision on the family, including my own country Egypt. In June 2014, the group of friends of the family at the UN in Geneva was oﬃcially launched with a cross-regional membership of more than 70 countries. This step inspired later the launch of the group of friends of the family in New York that actively organizes a series of formidable ac&vities and events and was coordinated by Belarus.

Those countries believes that the Human Rights Council has a responsibility to discuss best practices and major challenges facing the implementation of States' obligations under international human rights law in relation to providing protection and assistance to the family, and that the Council can build on the valuable work previously undertaken by the General Assembly and the Commission of Social Development and contributes with its own unique human rights perspective to the matter.

Their second departure point was that they share a conviction that the family has a great potential to contribute to the protection and promotion of human rights including in areas such as poverty eradication, elimination of violence against women and children, protecting rights of the child, elimination of harmful practices, supporting the rights of older persons and persons with disabilities and increasing the access to the right to education. Family is an undisputable social, cultural, moral and religious value that should be celebrated and nurtured. And that States are required to take speciﬁc measures to ensure the protection of this social institution as a unit and promote its sustainability and preservation.

Social science research proved that a strong, cohesive and well-supported family is a place where the human rights of the members of this family can be further fulﬁlled. Even if in some situations abuses do take place in family secng, a fact that should be urgently addressed, this should not stigmatize or overshadow the broader role of the family unit in the society. These abuses are crimes that should be punished rather than be adributed to the family.

The draft resolution on the "Protection of the family: The role of the family in supporting the protection and promotion of human rights of persons with disabilities", which I presented while serving as Egypt’s Representative in Geneva from 2014 to 2017 used to garner the support and be co-sponsored alone by 68 Member States including Russia, China, the Arab Group and 55 countries from the Organization of Islamic Cooperation (OIC).

The resolution underscores that measures aimed at protecting the family on one hand and protection and promotion of human rights of family members on the other, are directly correlated and go hand in hand.

Respect for human rights of family members is an indispensable component to any eﬀective approach to provide protection and assistance to the family unit.

The resolution also pays particular aden&on to the challenges and vulnerabili&es facing families in speciﬁc situations such as families headed by single parents, intergenerational families and child headed households. I had hoped to see countries from Europe and the Americas in this group of countries. The Holy See also supported the resolution even if it didn’t co-sponsor it, as part of its overall support of the family issues which is widely recognized and globally appreciated.

What we faced at the Human Rights Council, were proposals by other countries which aimed at changing the entire focus, scope and orientation of the resolution or revise the letter and spirit of obligations under international law. That we couldn’t accept and for this mere reason that the Family Resolution was always a voted resolution in contrast to a consensus one.

What I would like to clarify here is that the Family Resolution didn’t try to impose one-size-fits-all definition for the family, but it rather left this matter within the discretion of each State and society.

We recognize the diversity of circumstances and challenges facing families around the world. However, we avoided to accept ambiguous language on the so-called “diverse forms of family”. The danger of speaking about absolute and unspecified diversity can be an invitation to cast protection on family settings where human rights may not flourish or be respected. It is not simply about the controversy of same-sex couples as some people might think, but is it about the inappropriateness of providing an open ended recognition to so-called "diverse forms" that may include child marriages, incestuous and polyandrous arrangements and group marriages!

Family is family everywhere as a unit that bonds men, women and children together, even if families, such as single-headed families including widows and divorcees, extended families, and migrant and indigenous families for example, existed in various settings and faced diverse circumstances; they should remain reflective of similar essence and shared values.

Let me recall a relevant quota&on from the joint declaration of Pope Francis and Patriarch Kirill of Moscow and all Russia on 12 February 2016 in Havana: "The family is based on marriage, an act of freely given and faithful love between a man and a woman. It is love that seals their union and teaches them to accept one another as a gift. Marriage is a school of love and faithfulness."

In Qur'an, in several verses, every Muslim is required to maintain family ties and kinship support his or her family and raise children in an atmosphere of love and compassion and in a family environment which constitutes the nucleus of the wellbeing of the society.

In Sura Al-Rum (The Romans) in Quran, God says "O And of His signs is that He created for you from yourselves mates that you may ﬁnd tranquility in them; and He placed between you aﬀection and mercy. Indeed, in that are signs for a people who give thought ".

And in Sura Al-Nisaa (the Women), the Almighty says "O mankind! Reverence your Guardian-Lord, who created you from a single person, created, of like nature, His mate, and from them twain scattered (like seeds) countless men and women; reverence Allah, through whom ye demand your mutual (rights), and (reverence) the wombs (That bore you): for Allah ever watches over you."

And I am sure, there are similar directives in the Torah.

Let me now turn to how we protect the Family in Egypt. It is considered as a force for positive change, an institution that preserves generational solidarity and a place where human rights can prosper and ﬂourish. Article 10 of the Egyptian constitution recognizes the family as the basis of the society built on religion, morals and patriotism and that State is keen to ensure its preservation and stability.

Before I conclude, I want to acknowledge the valuable contributions and eﬀorts of hundreds of civil society organizations around the world including, the UN family caucus, Family Watch International, Papa Geovanni 23, Alliance Defending Freedom, C-fam and many others that supported and continues to support and enrich this endeavor.