Menu
Notes/I stood up for a Young Muslim in Norway in 2008, and I am still persecuted for that

I stood up for a Young Muslim in Norway in 2008, and I am still persecuted for that 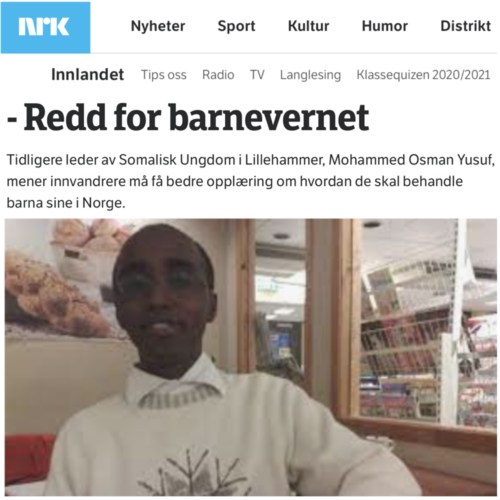 (Screenphoto) The young Muslim in Lillehammer, Norway was attacked in Norwegian Broadcasting Company (NRK), and nobody was defending him. So I did!

In an editorial today in the antifamly, probarnevernet and propride newspaper Vårt Land, I am heavily criticized for my friendships, cooperations and alliances.

This newspaper used to have in its bylaws that it should «build bridges» in Norway between religions and lifestances, but for the past years it has become a voice for creating divisions and suspicions - and their favorite journalistic value seems to be «Guilt by Association».

Vårt Land has published 11 pages against me in the last two days alone. and more are coming.

Frankly, it bores me. Let them attack me - but don´t attack my friends!

In their effort to slander me, I chuckled when I saw that the editorial today even says:

«In Norway, Jan-Aage Torp has been given attention, among other things, for defending the use of corporal punishment as a natural part of the upbringing of children...».

Now, this refers to November 10th, 2008, when I received a phone call from the Norwegian Broadcasting Company (NRK) which was frantically trying to find a Christian cleric who would defend a young Muslim in the town of Lillehammer, Norway who had said things to NRK about the upbringing of children. He cautiously had mentioned that his culture allowed for light corporal punishment, but that he tried to get his countrymen to change their practice.

When the NRK reporter told me that NOBODY would defend the young Muslim, then I said yes. I gave a statement, consisting of four sentences, in which I made it abuindantly clear that I had never ever spanked my own six kids, and that I did not believe that spanking was a good way. However, I said also that we should respect cultural differences.

Suddenly, it was all about me. «Pastor Torp beats kids»!

NRK made a huge story, ignoring what I had actually said. 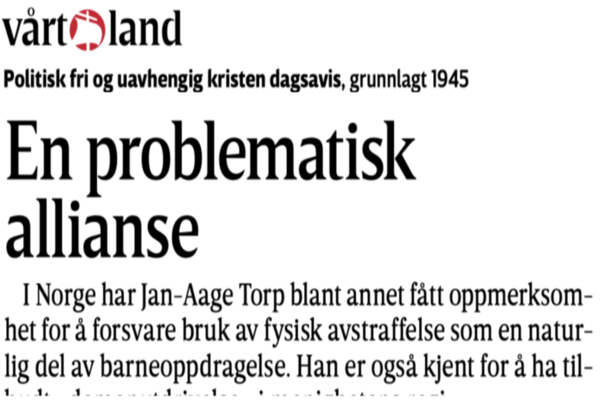 And now 12 years later, Vårt Land includes this in their editorial attack against me. Not the first time, by the way.

Vårt Land seems to exploit the power of false testimonies: «The lie walks on quick feet - but the truth comes, although it is late». And the journalists are paid handily by Norwegian government money. «Investigative journalism?»

What an unprofessional, unethical newspaper that works in such ways.

I have searched Vårt Land´s coverage of great nations such as Kazakhstan, Saudi Arabia, Egypt, Tunisia, Morocco, Indonesia, India & more. It is heavily slanted against these nations.

No use in complaing to the Press Complaints Commission (PFU), because the Chairperson of PFU is the wife of Vårt Land´s Chief Editor.

I would still have defended the young Muslim in Lillehammer.

To build bridges, we need to honor and protect each other.