Menu
Notes/«Politics between God and the Demonic»

«Politics between God and the Demonic» 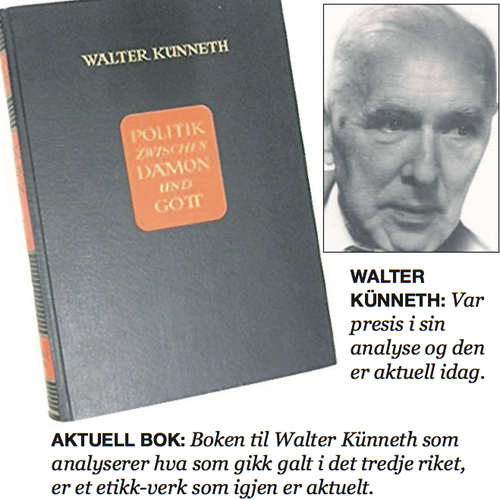 The Biblical world view is so different that the world views of liberal Christianity and secularism, but it sure harmonizes with the gut of modern men and women, who in our own nation have left the liberal Church of Norway by droves – by hundreds-of-thousands. The recruitment of future priests, as evidenced by the numbers at the state-financed  theological faculties, is so low that the Church of Norway will be extinct within a few decades.

Modern Westerners seek help and guidance from anyone who actually believes in the reality of the spiritual realm. Much like when Jesus confronted the wickedness and hollow religiosity of the Judaism of His day, 2000 years ago.

Today in the 20th Century we need to give people not just «spirituality», but the reality of the Cross of Jesus Christ and the unwavering truth of the Bible.

Liberal Christianity has taken control of the state-financed Church of Norway. It is no exaggeration to say that the official Church of Norway is 100 percent pro-LGBTI (pro-Lesbian/Gay/Bisexual/Transsexual/Intersexual). The next change will be a massive turning away even from heterosexual marriage. We will see multiple-marriages (3 or more marriage partners), marriages with non-humans (dogs, items of affection) etc. The list is long, and it is coming – full fledge.

Who is at fault?

«For it is time for judgment to begin with God’s household; and if it begins with us, what will the outcome be for those who do not obey the gospel of God?» (1Peter 4:17)

We – the Christian Church – have allowed this to happen by our compromises, lukewarmness, experiments with modernistic theology, play with «church politics», marital infidelities, sexual lenience, our pride and arrogance.

What is really happening?

We do not like to acknowledge it, but the unquestionable reality is that a systemic spiritual take-over has taken place in the institutionalized Church, to such an extent that it is no longer «the Church».

«When an impure spirit comes out of a person, it goes through arid places seeking rest and does not find it. Then it says, ‘I will return to the house I left.’ When it arrives, it finds the house unoccupied, swept clean and put in order. Then it goes and takes with it seven other spirits more wicked than itself, and they go in and live there. And the final condition of that person is worse than the first. That is how it will be with this wicked generation.»

There is a parallel in modern history, namely in the Third Reich, when the Lutheran professor of theology Walter Künneth (1901-1997) opposed the co-opting of the Lutheran Evangelical Church by the Nazi state by founding in May 1933 the Young Reformation Movement (Jungreformatorische Bewegung). The Gestapo replied by questioning him and banning his works across the entire Reichsgebiet.

Künneth co-published in 1937 «The Nation of God», which addressed the themes posed by National Socialism: Führer-headship, obedience-principle, Jewdom, and the Race Question. This work was also forbidden, and he was banned from either publishing or teaching throughout the entire Reich.

After World War II Walter Künneth published in 1954 an ethics named «Politics between God and the Demonic» («Politik zwischen Dämon und Gott»). On account of his experience during the Third Reich, Künneth captures the tension that characterizes our world between secular authorities as the ordering power of God (Romans 13) and the demonic state (Revelation 13). Künneth concedes citizens the right to resist the state and its laws.

But Künneth takes this one step further by acknowledging the Biblical and practical reality of the demonic. He was succinct in his analysis of systemic demons that he had seen take over the Church in the 1930´s.

But Künneth´s antidote was his «Theology of the Resurrection» («Theologie der Auferstehung») which he wrote in 1933.

The victorious resurrection power of Christ trumps the demonic. 2000 years ago. During the Third Reich. And in 2017!