A Scathing Attack on Poland - at Oslo University

Seminar at Oslo University: «Rewriting the Separation of Powers in the European States»
Jan-Aage Torp
May 18, 2018 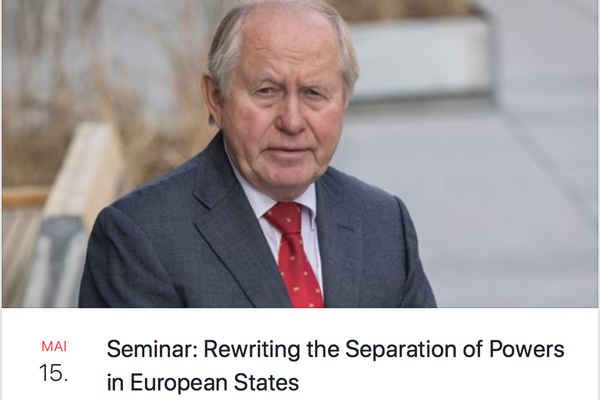 Professor Jan E. Helgesen has reached the retirement age of 70.

Yesterday and today I am attending a two-day seminar at the Norwegian Centre for Human Rights of the Faculty of Law (University of Oslo), held at the National Library. The topic is «Rewriting the Separation of Powers in the European States», and is held in honor of Professor Jan E. Helgesen who has reached his retirement age. The seminar builds upon the massive expertise and experience that Dr. Helgesen has from his work on international law and especially as an integral part of «The European Commission for Democracy through Law» (The Venice Commission), which was founded in 1990 to give constitutional counsel, and it has since expanded to deal with public law, international law, human rights, election law, ombudsman law, process law, and court law. The Venice Commission is recognized as the world´s leading consultancy agency within this professional field.

In attendance yesterday were approximately 60 leading figures in Norwegian academia, especially as related to the legal field. There were reknown professors in almost every seat. I found my place on the second row, and I enjoyed every minute of it!

I had three comments during the six hours I was present yesterday, and I truly appreciate the openness and respect that was shown to me, being a pastor myself without formal legal training, but with vast experience from the court room and in legal proceedings in European states. A special thank you goes to Professor Jan E. Helgesen who displays an extraordinary willingness to listen sincerely and speak wisely, and who has initiated such a seminar that will prove invaluable for the development of the field of constitutional law in Europe and beyond. 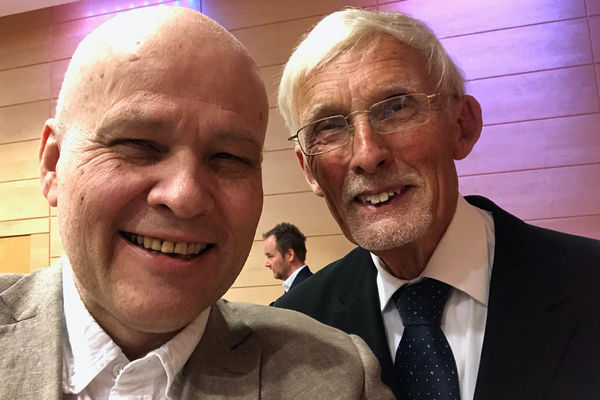 With Professor Pieter van Dijk in the break

My first comment and question followed the insightful lecture on «The Trias Politica in a Changing Political and Legal Environment» by Dr. Pieter van Dijk, Professor emeritus and former judge at the European Court of Human Rights (ECHR) in Strasbourg. He gave a helpful overview over the history of the separation of powers since Charles Montesquieu of the 1700´s. «The separation of powers» (used interchangeably with the Trias Politica) is a principle which is implemented in many constitutions throughout the world. Dr. van Dijk showed how the Venice Commission has been able to help sharpen the understanding and implementation of the Trias Politica in several states.

My comment and question to him was, however, specifically following his «benchmark» comment on the need for a proper separation between the executive and judiciary branches. I raised the issue of the numerous cases in Norway related to the arbitrary and unwarranted interventions into families by the Child Protection Services («Barnevernet»). My contention was that the judiciary is hardly given any possibility of making sound judgements because the CPS/executive branch has control of all the money and the systems.

Dr. Pieter van Dijk showed a - not surprisingly - great willigness to understand my concern. He said that it concerns him that many cases against Norway´s CPS are being dealt with in ECHR, and although he does not have insight into the individual cases, he does see a pattern that needs to be solved.

Dr. Jan E. Helgesen followed up with an equally insightful comment, expressing - to my delight - that these matters present big challenges to the legal expertise in our nation.

In the following breaks I had positive chats with both Dr. van Dijk and Dr. Helgesen with the opportunity for more discussions.

My second comment and question followed another insightful lecture on «The Case of Poland» by Dr. Christoph Grabenwarter, Professor at the University of Vienna as well as a Judge at the Constitutional Court of Austria. He explained the problems that have been encountered since 2010 in Poland in matters relating to the Polish Constitutional Court, and he gave insights into how such problems could be avoided. Although Dr. Grabenwarter is strongly critical of the developments in Poland, he refrained from negative characteristics of the Polish people, perhaps because he has spent considerable time there through the years.

In my comment to him, I posed the question whether the international communty is over-emphasizing certain developments in Poland in such a way that the West is widening the conflicts among the Polish people. I said: «I know leaders on both sides of the Polish divide, and it seems to me that the conflicts are more about old suspicions and ´chemistry´ than about ideology.»

Again, I was amazed at the level of openness that my comment was shown by Dr. Grabenwarter. He went on to elaborate on his own experiences with good colleagues in Poland, and he actually claimed that the divisions in Poland can be traced as far back as to the communist era.

In the break, Dr. Grabenwarter also showed a genuine concern. 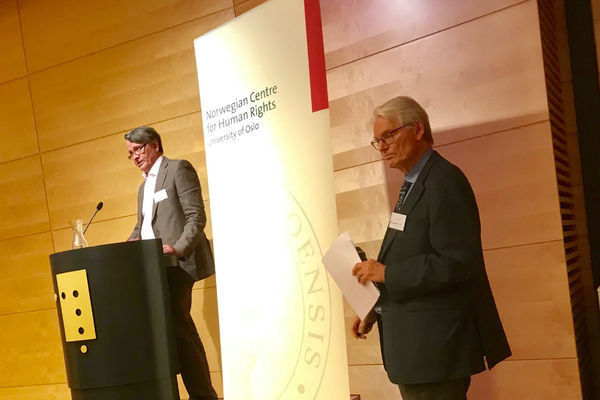 Then: A Scathing Attack on Poland

However, yesterday, Dr. Kaarlo Tuori, Law Professor at the University of Helsinki, might have had a bad day.

In his lecture on «The Case of Hungary», he showed first what he finds worrisome about the developments in Hungary, and I would concur on several of his points, having a lot of experience in Hungary myself during the past 29 years.

But when Professor Tuori made his comparisons of Hungary and Poland, then my jaw dropped: He unleashed a scathing attack on Poland and the Polish representatives in the legal and political arenas. He gave no room for doubt. (I have listened through my audio recording. The official streaming video is availabe from the Faculty of Law.)

I had not planned to make another comment, but the moderator of this section, Professor Nils Butenschøn, gave me the opportunity. I expressed my deep concern that Dr. Tuori would make such a onesided and negative assessment of another nation, especially when the organizers of the seminar had not deemed fit to include any representative of Poland in the program, and especially nobody that represents the current state of affairs in Poland. I criticized this strongly as being the opposite of «academic» and «progressive». I questioned that it seems that the Venice Commission has nobody in its midst who actually would speak for «the other side» in Poland. I also expressed my deep concern regarding the «anti-nationalism» that Dr. Tuori, as well as other lecturers, seemed to display in their presentations yesterday. Although I see the benefits of the Venice Commission´s work, I questioned that the Commission seems to adopt a narrow, «a-historical» view of the relationships between European peoples and states.

Clearly, the distinguished Finnish professor was annoyed by my comment, and he brushed aside my comment as being «Not a question». The moderator, Professor Nils Butenschøn, did nothing to correct the scathing, one-sided attack on Poland.