Vårt Land does not serve True Faith in Kazakhstan nor Norway 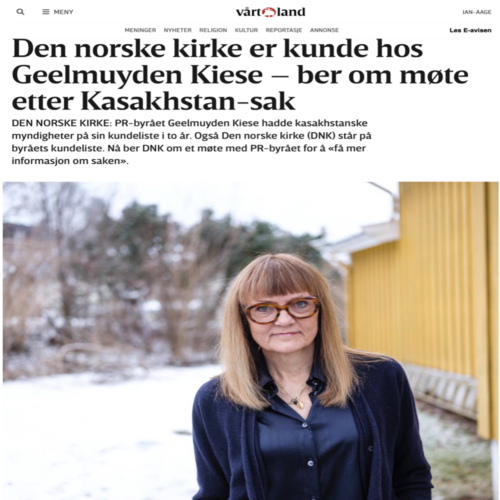 Screenshot of today´s Vårt Land on the web

Kazakhstan has been through some challenging days since January 2nd, especially the common people of the young nation.

As a pastor, on January 4th I called Christians all over Europe for prayer for Kazakhstan. I said in numerous emails and messages: Let us stand up for a people and nation that is bleeding under terrorist attacks and sinister efforts to destabllize constitutional institutions and ideals.

The call to prayer has been received all over Europe: Roman Catholics, Orthodox and Coptic Christians, Anglicans, Presbyterians, Lutherans, Baptists, Pentecostals - all across the board the call has resounded in the hearts of genuine believers.

Ever since I ministered in Almaty, Kazakhstan in September 2003, I have loved that people and nation.

My joy has become complete during the past three years when I have connected more and more with religious leaders in Kazakhstan: Muslims, Jews, Roman Catholics, Orthodox and Coptic Christians, and Pentecostals. I feel their hearts,

The call to pray for Kazakhstan has been met with gratitude and joy by my religious friends in Kazakhstan.

But as I have told them: I have merely done what a genuine Christian will always do: Show love and support when friends are in dire need!

But the past two days, a supposedly «Christian» newspaper in Norway, Vårt Land, has started an unprecedented series of attacks against Kazakhstan.

It started when their young and overly ambitious editorial commentator Emil André Erstad a couple of days ago wrote a fantasy-commentary about Kazakhstan.

Erstad´s commentary has been followed up in just two days by 10+ illustrated articles with headlines in bold! And that is in a newspaper which only prints 24 pages a day :-) Where does this zeal come from???

My Kazakh friends are shocked and hurt by Vårt Land.

But for me: It is as expected. This is what the newspaper Vårt Land has become under the present editorship.

In June and August 2021, Vårt Land printed 24 pages of articles about me, trying to find something bad. Of course, they seemed to find only great stuff.

Vårt Land could not even find anything about financial privileges for me, simply because I never seek money. I serve God. Period. I don´t get paid to pray and speak for nations and friends.

But Vårt Land sought to weaken my influence as a player and friend of influential diplomats, politicians and religious leaders in Norway, Europe and globally. What they attempted, however, has failed miserably. I have more and stronger friendships than ever before. So thank you, Vårt Land

Vårt Land has a stated goal of being a player in all matters regarding religion, faith and life-stances.

But under Chief Editor Bjørn Kristoffer Bore (since 2018), and even his predecessor in 2016-2018, Vårt Land has become an outspoken defender of the homosexual lifestyte, of governmental take-overs of children from their parents, and against vibrant religion - whether Christian or Muslim. Etc, etc, etc.

That is why Vårt Land cooperates closely with «The Council for Religious and Life Stance Communities in Norway» («Samarbeidsrådet for tros- og livssynssamfunn» - STL) which uses governmental funding to promote what they narrowly see as «Norwegian values».

Thank God that most Muslims don´t buy into that!

Sadly, though, some religions - under pressure - seem perhaps to succumb to the allure of money.

The Church of Norway

Yesterday, in their frantic efforts to undermine and ostracize Kazakhstan, Vårt Land even found a leader of the Church of Norway (= formerly the official State Church) to put pressure on the PR Agency Geelmuyden-Kiese to severe ties from the Embassy of Kazakhstan.

While true, praying Christians in Europe and Norway are bleeding and praying for the people and nation of Kazakhstan, Vårt Land recruits leaders within the Church of Norway to undermine the pressurized nation.

Let me say conclusively: Vårt Land does not serve True Faith in Kazakhstan nor Norway!