KKN participated in Egypt´s Webinar on the Nile Basin 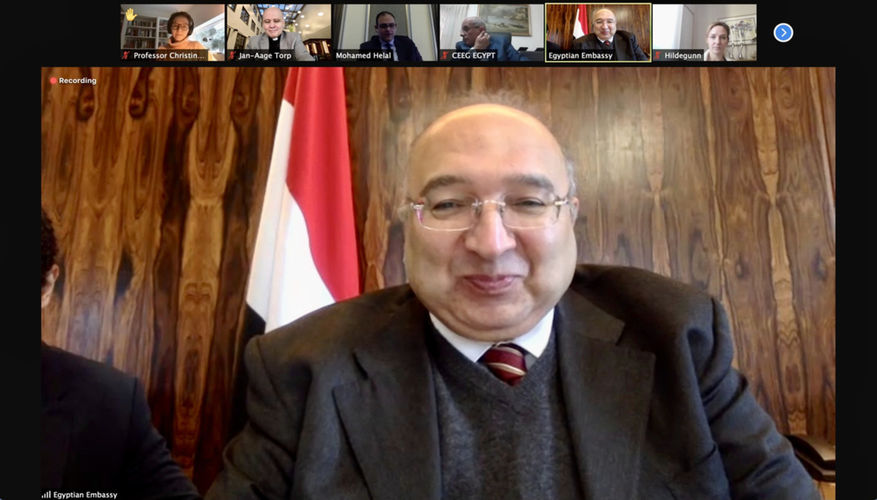 On Wedneday, the Egyptian Embassy in Oslo held a highly informative webinar on «The Grand Ethiopian Renaissance Dam and Sharing of Transboundary Water Resources in the Nile Basin». H.E. Ambassador Amr Ramadann had recruited high level Egyptian speakers from Egypt´s delegation to the GERD Trilateral negotiations between the neighbours Ethiopia, Sudan and Egypt.

A few Norwegians were also in attendance, including Members of Parliament and foreign policy experts, Two Norwegians were given the floor: 1) Dr. Christina Voigt, professor of International Law at Oslo University; and 2) Rev. Jan-Aage Torp, chairman of Kristen Koalisjon Norge (KKN):

The issue before hand is not triggered by scarcity of water as probably some might think or conclude. In fact, there is abundance of water that falls on the Ethiopian plateau and it receives around 1’000 billion cubic meters of annual rainfall each year (936 BCM to be exact), that is four digits, while the agreement between Egypt & the Sudan in 1955 puts Egypt’s share to no less than 55 billion, which is 2 digits. I think that is illustrative enough.

Egypt relies 97% on the Nile water represents for drinking and irrigation purposes as well as generating electricity from the High Dam in southern Egypt. On the contrary, Ethiopia’s dependence on the Nile for its water needs is merely 30% or less. Keep in mind that Ethiopia has 12 major basins and 12 large lakes.

There are rules under international law that govern the rights of upstream, riparian and downstream states. We are not starting from scratch or reinventing the wheel when it comes to the Nile. As the Greek historian Herodotus described it “Egypt is the gift of the Nile".

The new dam is built on the claim that its main purpose is generating electricity, not utilizing water. That is probably true in a sense, but you don’t need a Reservoir of 74 billion cubic meter to generate electricity?!

There is other socio-economic negative range of impacts of such a dam that will cause significant harm to Egypt, including agriculture (arable lands & type of crops) and unemployment where agriculture contributes 14% to the GDP and absorbs 28% of the labour force in Egypt; a country of more than 100 million inhabitants, their lively-hood depends greatly on the Nile. The Egyptian side has estimated figures for these impacts.

This political aspect of this disagreement or stalemate is huge. It affects stability in eastern Africa, including the horn of Africa. That is why Egypt brought this matter to the attention of the Security Council on 19 June last year, before Norway assumed its membership, given the gravity of the situation, and in light of Ethiopia’s continued inflexibility and persistent policy of obstructionism, to say the least, which potentially constitutes a threat to international peace and security in the region and its future.